The LST party march to the Race Course prior to embarkation. They consist of Support Company, company reserves and such additional personnel as cannot be fitted on to the two LCIs. They are herded together in pens like a POW cage, but excellent food is provided.

A two hours march brings the LST party to the quay where they embark, together with some units who are to be attached to the Brigade in the evening the ship moves out of the harbour and anchors in a gentle swell (sufficient to cause many green faces).

The 'fighting four hundred', or the two LCIs parties, march to the Race Course and there is a general feeing of relief at the imminent prospect of a job to do and of leaving the fly-ridden shores of North Africa for ever. The LST has a practice 'Abandon Ship' followed by a shower of naked Guardsmen leaping or scrambling over the side in Mae Wests.

2 Scots Guards embarking at Tripoli on 3rd September 1943. The two officers facing the camera to the right are Lieutenant Stuart and Major Crichton-Stuart, the F Company commander.

A calm sea makes a pleasant crossing for the LST, but the small and overcrowded LCI's are too much for all but the good sailors. No air or submarine alarms. On the 8th the LCIs, who are in a separate convoy, arrive at Termini, Sicily, where two Guardsmen swim ashore and get lost (such is their desire to visit new lands). However they rejoin later.

About midday the LCIs disembark on Roger Beach and march to the assembly area. At 1600 hours the LST disembarks and the vehicles finally escape from the confusion of bogged vehicles and reach the assembly area at last light. A limited night advance along a route prepared and picquetted by the carriers brings the battalion about a mile and a half short of a mass of buildings soon to be known as the Tobacco Factory area. This important crossroads about two miles west of Battipaglia. The situation is fluid to say the least; and dawn is awaited with mixed feelings.

The battalion moved up to take over from the Grenadiers, on the line of the road half a mile short of the Tobacco Factory, who were then to move to our right towards Battipaglia. After taking over the battalion pushed on to the Tobacco factory with Right Flank on the right followed by Left Flank and G Company on the left and F Company in reserve. Right Flank had little trouble to reaching their objective. Left Flank came up in the centre with the barracks and station as an objective, both of which were cleared. G Company pushed on in the face of much opposition and reached the line of the railway, Lieutenant Dollard and his platoon doing extremely well.

Owing to the very heavy fire from the crossroads and village, G Company and Left Flank had to withdraw slightly, the former retaining an OP on the railway line which was to become the most valuable in the battalion's position, and the latter evacuating the station and barracks. Lieutenant Fyfe-Jamieson got his platoon out of the station very well but got caught by his trousers on some wire. Serjeant Lumsden cut Lieutenant Fyfe-Jamieson 's trousers off under heavy fire and both returned safely. Right Flank also became involved in the fighting in the barracks and Lieutenant Bowen-Colthurst was wounded in the hand.

The day was marred by the death in the morning of Captain Sir H. Astley-Corbett when an 88 mm shell landed in Battalion Headquarters. Major Crichton-Stuart was badly, and Captain Romer slightly, wounded. Two anti-tank gunners killed and three wounded. The Commanding Officer and Brigadier had miraculous escapes. As a result, Lieutenant Philipson took over command of F Company. The Padre was wounded by a bullet in the ribs. The following other ranks were killed in action:-

A day of sniping by both sides and shelling by us. G Company's OP proved its worth. Lieutenant Dollard and platoon killing, with a Bren, several Germans, including an officer. Magnificent work by 65 Field Regiment who were in support of us.

Night attack at 2130 hours after artillery barrage. Right Flank right with the main Battipaglia-Salerno road as its objective. G Company in the centre with the job of clearing the factory and F Company on the left - objective the crossroads. Part of Right Flank reached their objective (Lieutenant Fraser's platoon) but the rest became separated and surrounded and were overrun by AFVs and taken prisoners. Major Bulkeley, Captain Willis and Company. HQ were the only ones to escape, the former having a number of narrow shaves after he had gone back to try and collect the company.

G Company fared better and got into the Tobacco Factory but were forced to withdraw, losing Lieutenant Sir N.J. Cayzer killed and Lieutenant Dollard wounded. F Company came under very heavy Spandau fire from the crossroads. Lieutenants Beckett and McLeod were killed and Lieutenants Phillipson and Capt. Weston Smith reported as missing. The company withdrew to its original position. Other officers missing were Lieutenants Clarke, Fraser and Elliott. The two last turned up a few days later after escaping from the Germans, and Lieutenant Clarke was later reported prisoner of war.

The following other ranks were killed in action:-

The battalion slept and sorted itself out. Major P. Stewart-Fotheringham took command of F Company with Lieutenant Henderson as 2 i/c. A quiet day of recuperation.

The battalion reorganised its position. F and Right Flank were combined under Major Bulkeley and the line held by the battalion was shortened and consolidated. In the evening the Germans put in a battalion attack on the Coldstream front.

A fairly quiet day with G Company and Right Flank's OPs having some good shoots. Right Flank developed the technique of ‘flushing the birds’ with mediums, shooting them, up with 25-pounders when they came into the open and then 'flushing' them again when they went to ground with 3.7-inch air bursts. Tac HQ re-joined Main HQ. Battipaglia was bombed by Mustangs.

More shelling of German positions. Tobacco factory dive-bombed most effectively in the afternoon and Battalion HQ nearly had a windfall as well. Captain Coke, Lieutenants Orr, Methuen and Duberly and 37 ORs joined the Battalion.

Carrier platoon went out on a recce, along the main road towards tobacco factory but got stonked and returned. G Company evacuated its OP because we were told that the factory was to be bombed. No bombing took place and we shelled the OP before re-occupying it. However G Company was attacked in its OP by three platoons and had to withdraw after disposing of a number of Germans.

The following other ranks were killed in action:-

Germans having withdrawn, the battalion moved into Tobacco Factory area.

Battalion was switched to the north of Salerno. The hills proved an unwelcome change to the flat of the Tusciano plain.

A quiet day disturbed by a little mortaring and shelling. Parties of 25 were sent off for a much appreciated bathe in the sea, toward which we had been casting longing glances. The following other rank was killed In action:-

Lieutenant Erskine's patrol reported Briguano clear. 46 Division on our left put In a night attack. Coldstream Guards improved their positions on the other side of the valley. A German night stonk killed two of Right Flank’s standing patrol and wounded one.

Other ranks killed were:-

All quiet except for a little shelling by guns we could not locate. All battalion has now had a bathe and looks a little cleaner. In the evening the battalion left positions to follow the Grenadiers advance up the valley towards Barouissi, but returned again shortly to their former positions.

Spent the day expecting to be told to brew up closely followed by the word to move neither of which came to pass.

The Coldstreams on our right attacked and in spite of heavy casualties took and held their objectives. Heavy enemy shelling.

The following other ranks are killed in action:-

Salerno harbour was used today for the first time. The battalion had heavy rain-which was an unpleasant novelty. The following other ranks were killed:-

The battalion was brought back into Salerno to rest and refit.

Commanding Officer's Parade in the Coliseum. After drill, Brigadier Gascoigne addressed the battalion and complimented them on the fine work they had done.

Lieutenant-Colonel Taylor inspecting the battalion in Salerno stadium, 30th September 1943. Behind him are Major Steuart-Fothringham and Captain Weir. 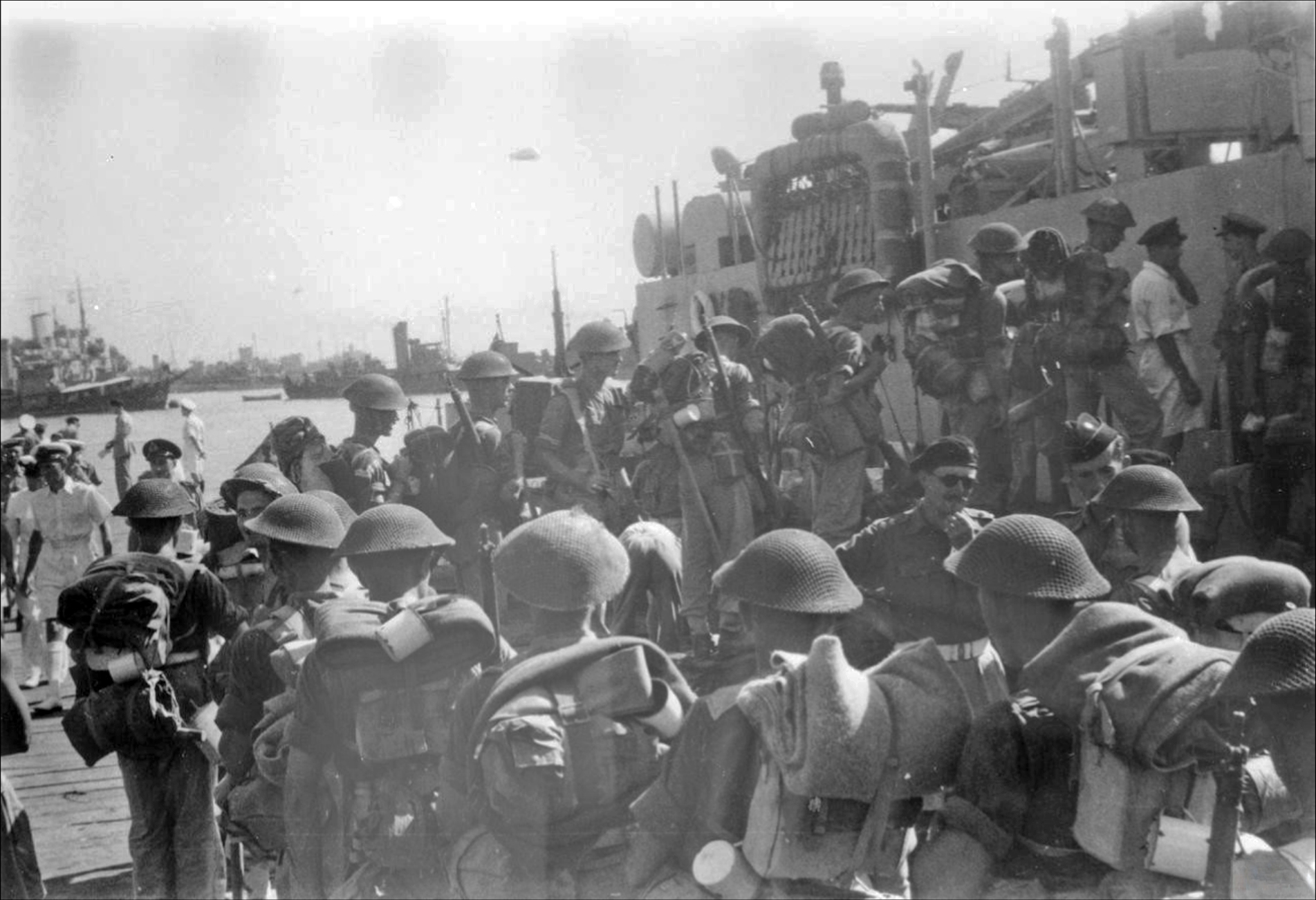 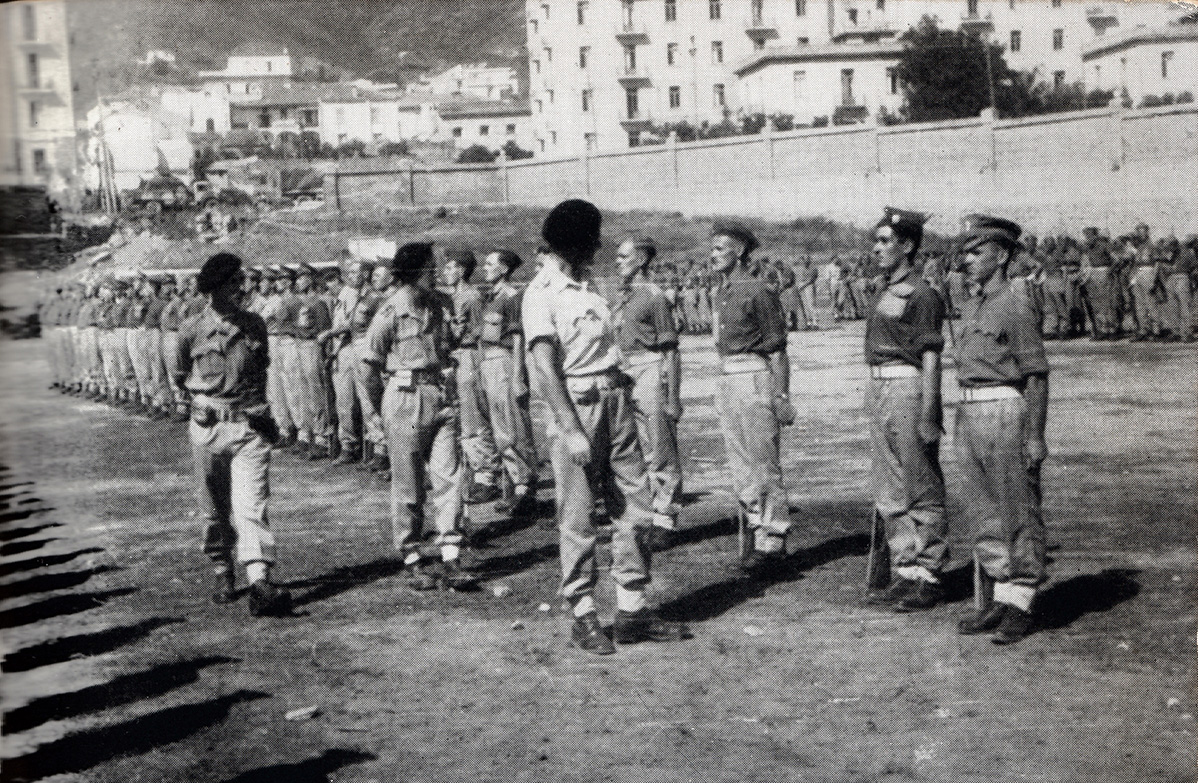